＊＊＊ In relation to the Swedish documentary film 'The Most Beautiful Boy In The World', to be released at the Sundance Film Festival on Jan.29 2021, Björn had a couple of interviews in Swedish media in recent years.

I had somebody close to myself translate them to English last month, so I have organized the content and put it into two posts. ＊＊＊

The first post is based on the TV talkshow 'Malou Efter Tio' interviewed by Malou von Sivers and the underlined comments are hers.

This week's theme is whether 'Success' is the same as 'Happiness'?ーand I have spoken to various people during this week about this topic.

Many people dream about a major movie role, especially many young people hoping to get a big breakthrough. One movie that was shown all over the world and obtained a 'cult stamp' was 'Death in Venice' in 1971, and one person that played one of the main roles was a young Swedish boy, Björn Andrésen. 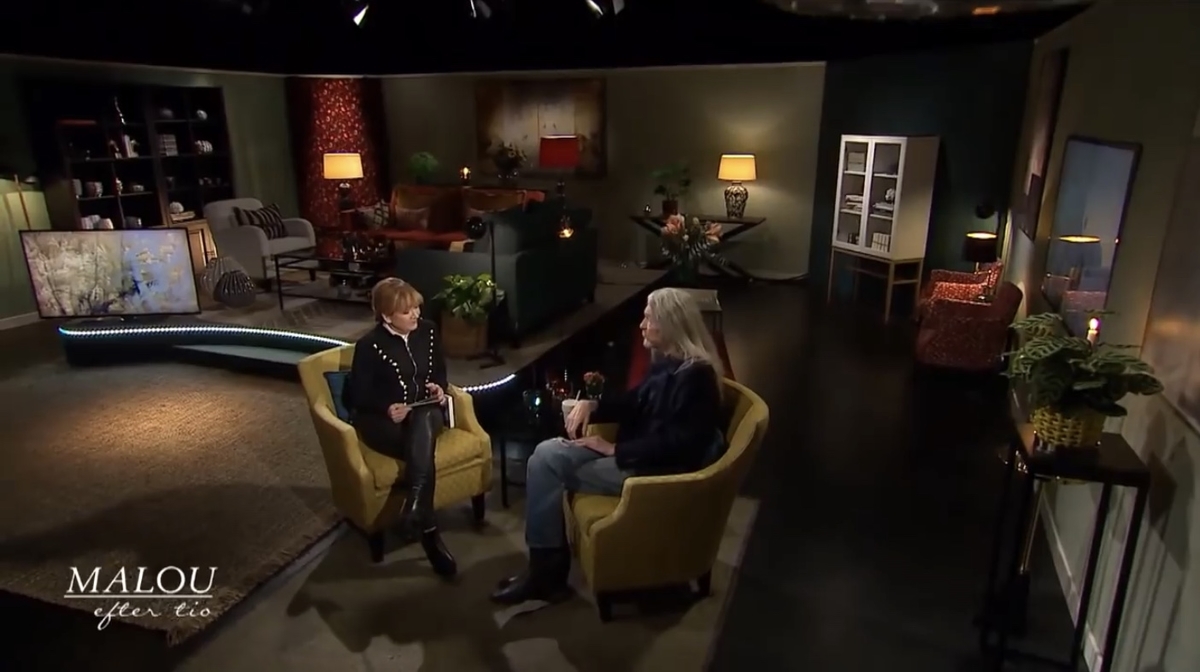 🖌Briefly introduced what the movie is about

This is as I said, something that many young people dream about. You told me that it was your (maternal)grandmother that applied for auditions for you for many movie roles

Yes, she was very ambitious.

Yeah…?
I don't know what her motive was... whether she wanted to have a famous grandchild or...

Perhaps she wanted you to make her dream come true?
Well, what do I know?

What did you think then when she applied these various auditions ? Something that you dreamed about as a boy ?
No, not much. It was really not my dream. Somebody said that 'Bjorn, you have lived this dream' ー but in that case it was somebody else's dream; it was not mine.

It was not your dream ?ーI have gotten hold of some unique pictures and film clips, from an audition in Stockholm where you met the film director who actually looked around in several countries to find the right person to play the boy in the movie. This was not just any film directorーit was a famous director called Luchino Visconti. So this is what it looked like when Bjorn was auditioning.

🖌Showed a film clip of his audition for Tadzio

What do you think when you see that ?
… 'Sourire !('smile' in French)… walk from there to there; you turn around and you smile' …

What do you remember ?ーYou don't look comfortable.

You mean doing this audition ?

Taking the sweater off and so on… I thought that was a bit strange.

Yes, we feel sympathy with the young boy when we watch you.

Thank you for the sympathy.(laughing)

Do you remember that it was uncomfortable or… ?
Not directly uncomfortable, but… what do you say… more than I bargened for.

It was your grandmother and not you who wanted to do this, really ?

Yes, I had not sign up for this myself.

But he became completely captivated by you, Visconti, and you were the one who got the role, as we saw. What do you remember from shooting the movie ?

Well, that is was mostly a lot of fun.

So that was fun ?

Yes.ーWe were a bunch of people who ran around acting.

I didn't really understand what was going on.

Yes, you know, it was a nice summer job ! 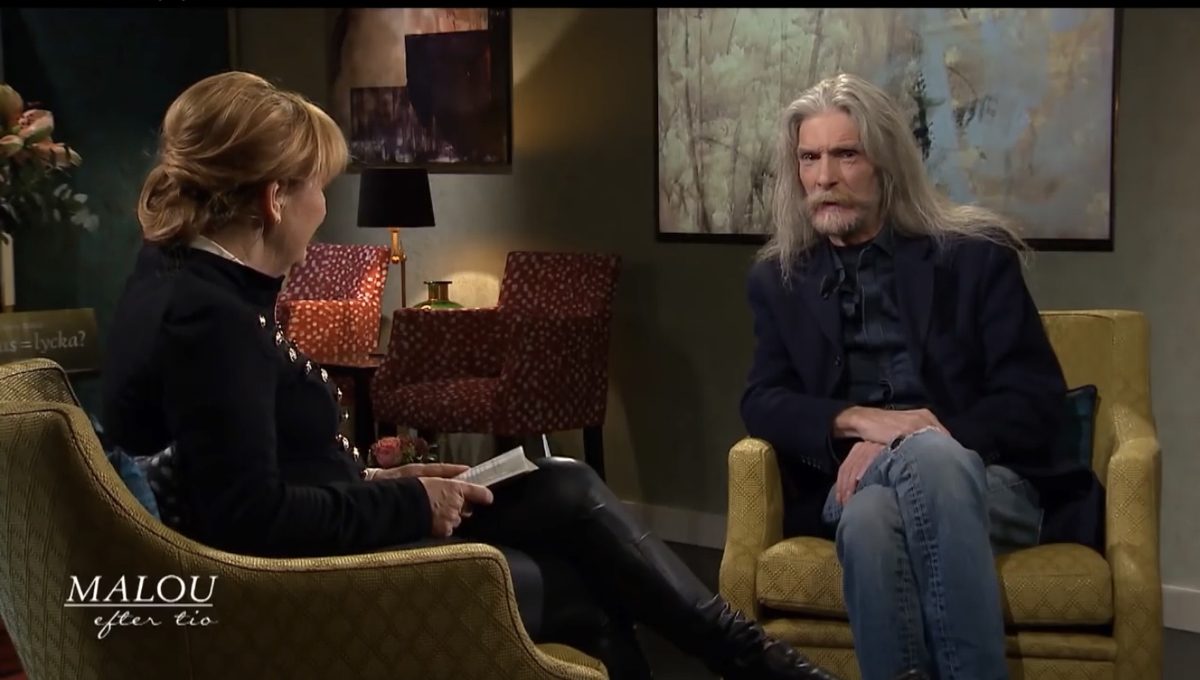 15. And subsequently the movie got a lot of publicity.ーHow did that affect you ?ーthat you became so famous ?

Well…affected?ーI don't know how much it affected me…

I did not really have any perspective on how big this was.
I did not know who Luchino Visconti was.

That's how ignorant I was.

Then they made the movie, and then some people came from the newspapers to interview me, but there was not so much publicity.

But the movie premiere was a big event, wasn't it ?ーWith the British queen invited, and so on…
Yes, that's right.

The boy in the movie looks rather shy…
Yes, and he still is…

And thereafter the publicity and popularity of the movie exploded.

Yes, that's right. And like everything it was fun in the beginning, but later it became a bit too much… The Cannes Festival, and so on…

You became known as the most beautiful boy in the world…

🖌He referred to some Swedish novel(couldn't catch the title) in which a 'boy with angel lips' is mentioned.

A lot of young people dream about something like this happening to them, and you could have thought that this was something that you wanted to pursue ーbut that didn't happen …
No, it didn't. If I had wanted to do that, I would probably have continued ーand had my  own ambition.

And then the world would have been open to you in many ways…
Many people have said so.

Did you get any offers that you declined ?

I think I was too lazy…

There were several projects that did not happen…

Because you were not interested…
Yes, I think so.

You lived at your grandmother's place, didn't you ? That's where you grew up.

Yes, after my mother passed away.

So your grandmother was an important person then, wasn't she ?

Yes, she wasーshe was the main person until I became an adult.

Did she come with you to Venice when you played in the movie?
Oh yes, she is also in the movie.

What did your grandmother play?
She played one of the guests in one scene of the movie.

We get an impression when you tell your story that perhaps that was your grandmother's dream ーmore than your dream.
Yes, probably. I had my own.

If it were somebody's dream, it wasn't my dream. 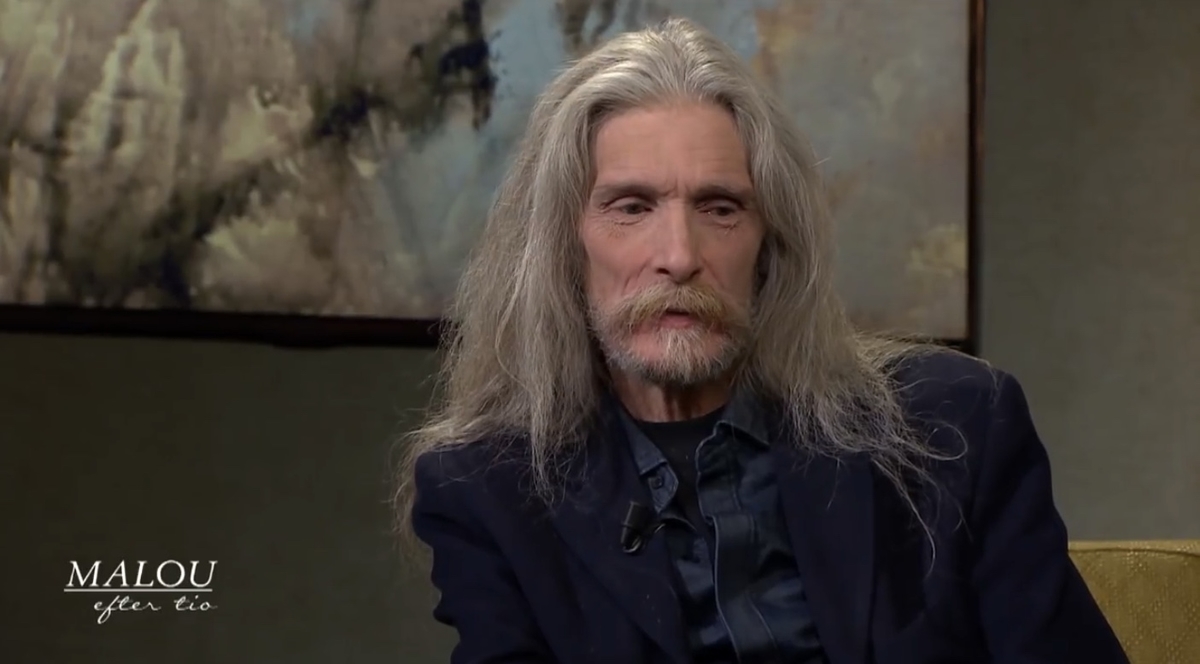 You didn't end up pursuing theater and movies but rather music, which you had been occupied with since you were a young boy.

My dream was music. But once you have been marked and received attention in a particular lifetime role, then it is, as I understand it, very very difficult to establish yourself as something elseーnot to say impossible.

You mean because you became so famous due to this, nobody wanted to talk to you about music or …?

Well…I have a story from the end of the 1970s, when I was at a party at the house of Karl-Erik Welin, the composer ーand naturally he had a grand piano there.

And at that time I was pretty well rehearsed on the piano.

So I played a classical pieceー1st movement of Liszt's Piano Concerto, I think.

And when I finished, a lady came over to me across the floor and saidー

'That was amazing! Are you able to do anything(at all)?'

I felt like sayingー'Excuse me, I have practiced for 10,000 hours and have been playing piano since I was three years old'ーbut I did not.

I just sat there astonished, with open mouth…

So 5-6 years after the movie. But you became known as the beautiful boyーand that's how it stayed…
Yes, not much more than that.

Were you there too ?
Yes.

I seeーso you and Lena Nyman were the 'Stupid Blondes'. What did you say at that time ?

It's so long ago that I don't remember ーbut just having a theme like that is kind of embarrassing.

Exactly.
The theme of the movie is the older man who becomes very attracted to the young boy. Did you understand what kind of movie it was ?

No, I had no idea what kind of movie it was.

You were just there(to act)…
Yes.

Were you embarrassed when you saw what kind of movie it was ?

No, not really…They gave me the book at the same time as I auditioned, and I think I read it.

You did not understand the power of the movie, I guess …and its image
No. 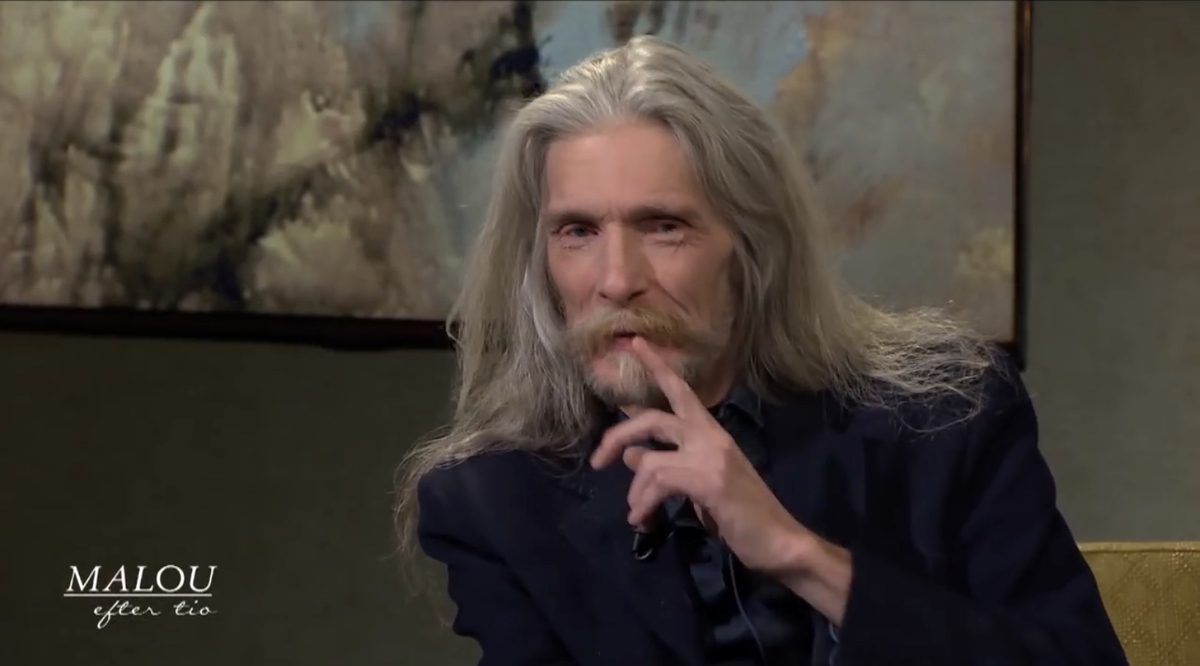 Yes, because I had never learnt how to flirt with girls ーthey were just there, and then it became embarrassing.

But wasn't it convenient that the girls came to you, a shy boy ーyou did not have to go out and look for girls, they would come to you …
Yes, they did, at that time ー but what can I say…

Do you think your life would have been different without this movie? Would you have made other choices ?

Yes, if I had been left alone, so to speakーI don't know, but perhaps I would have become a concert pianist.

It seems that this became an obstacle for you ?
Yes, there was a lot of commotionーand I have never been very self-confident.

I was well brought up boy who did what people told me to do.

Yeah, we can kind of see that during your audition too…
Yes, you saw that slightly confused lookーyou know, I am not the type who would say ' no, I want to do this'. 'I'm eager to please', as they say. 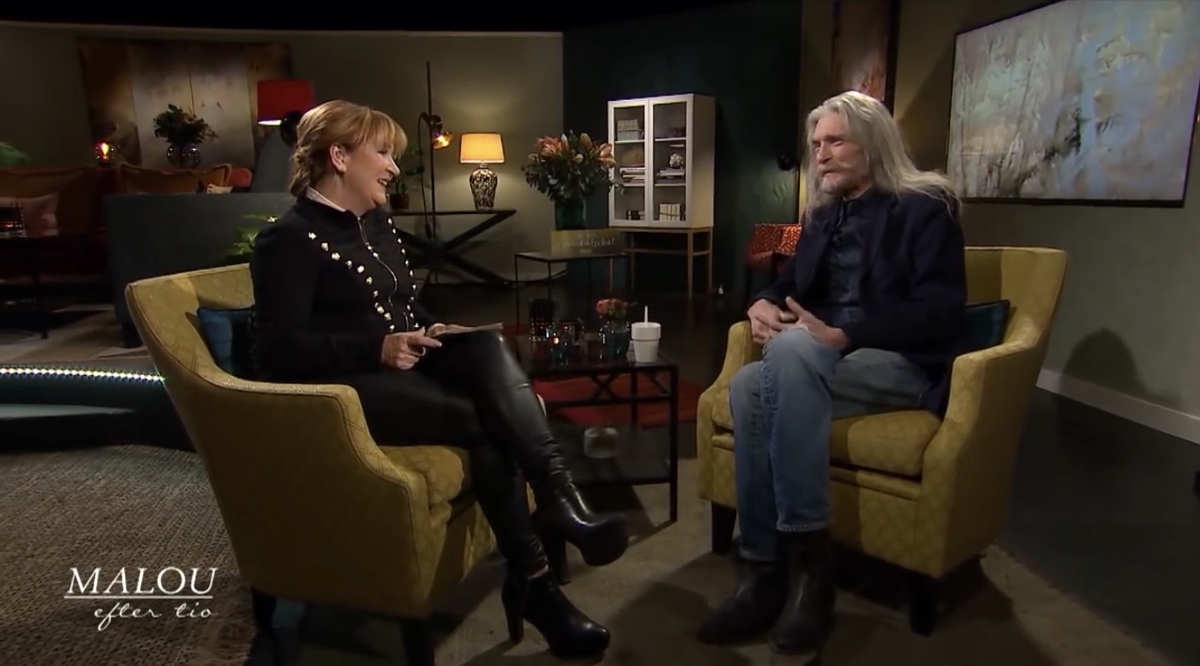 Quite recently you played in 'Jordskott'(a Swedish TV detective series). But they killed you quite early on (laughing)…

You disappeared after the first episode. Gentlemen ?

Yes, it was a minor role.

But how about music then…You have been a music teacher, among other things, and you are still performing…

Well, yes, but I am a bit reduced now, as I have developed some finger illnessーwhich limits the repertoire that I can play.

But yes, I am still playing.

Yes, if you are going to play Rachmaninov you need much agility.

So, then, is 'success' the same as 'happiness' ? (This week's theme in this show)

If you do something by your own power, where you yourself are the motorーthen probably it is happiness.

Yes, about my simple person…

(Laughing)…Are you kind of doubtfull about this too ?

No, not doubtfull. Kristian (one of the producers of the film) and I know each other since way back in time, so when he suggested it… what could I say ? 'No'?

No, it is a lot of fun to work with Kristian.

I am just puzzled.

It seems that you cannot understand that there is such strong interest in this.
No,ーI am puzzled by all this attention. I don't understand why this has come about.

And here we have invited you about the same thing…

But I am happy that you came, because we have many thoughts about thisーabout this boy 'who was not his own motor in this'…

No, it reminds me of an episode with my 6-year old daughter Robine who suddenly stopped on the street and said ー'Papa, what do you want to be when you grow up ?' She was quite serious. And I think it is a very relevant question …So I hope I can sell myself as a late bloomer(smiling).

(Smiling)Yes, and good luck with that.

Thank you for coming

“Being creative,
Using my heart,
My hands,
My mind,
Is an important part of
Who I am.”
By Debbie Mumm